The Wild Ride of Bitcoin

Who knows what it will be worth next year – or next week.

We do know one thing: bitcoin is one of the riskiest investments around. 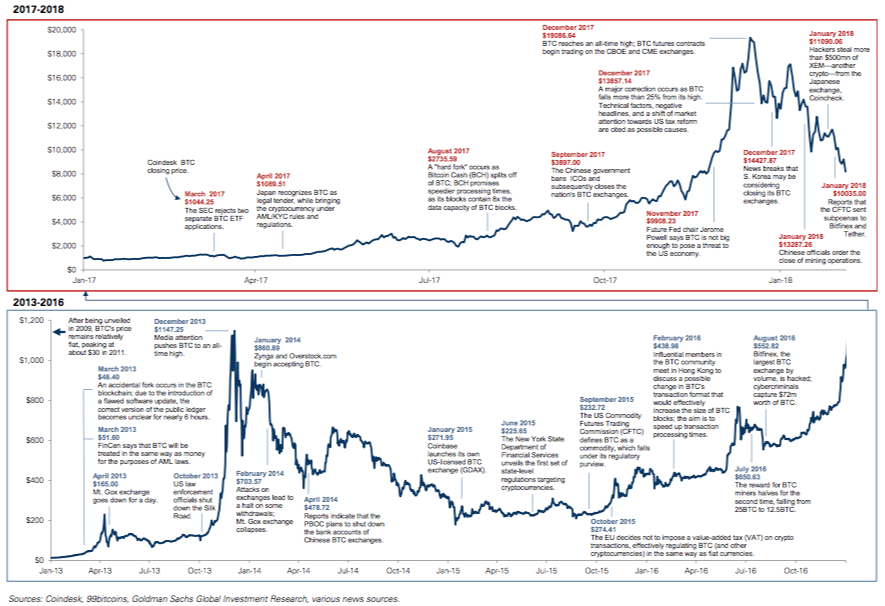 Bitcoin fever has yet to abate. Investors of all ages are asking about it (and other digital currencies). Should they put some of their retirement savings into bitcoin? Should they hedge with bitcoin? Will they miss out on “the next big thing” if they stay out of bitcoin?

If you are reluctant to get on the bitcoin bandwagon, you are hardly alone. Bitcoin presents a few perplexing questions for any investor.

Q: What is bitcoin, really? There are now bitcoin futures markets on the Chicago Board Options Exchange (CBOE) and CME Group, so you can now think of bitcoin as a commodity – but many bitcoin investors and users see it as a currency.

Q: How do you analyze it as an investment? If you want to research a stock, fundamental metrics are available. Not so for bitcoin or other cybercurrencies.

Q: Who determines bitcoin’s value? Speculators. At present, there really is no other answer to this question. The free market defines bitcoin’s worth. No government or central bank regulates it or assigns any value to it.

Bitcoin’s price can fall dramatically due to the headlines, or even comments from opinion leaders. In 2017, JPMorgan Chase CEO Jamie Dimon called bitcoin “a fraud,” and it fell 10% in response. (Dimon later said he regretted the remark.) Within the last year, South Korea and China revealed plans to restrict bitcoin trading; when South Korea made its announcement in January, bitcoin and ethereum prices fell 14% in a day. Another bitcoin shock came when Silk Road, an infamous website linked to drug trafficking, suddenly vanished. If you are wondering why the bitcoin market took that shutdown as a negative, you should know that bitcoin has been linked to money laundering, drug deals, and other shady financial transactions conducted on the “dark web.” While all Bitcoin transactions are verified through the blockchain, a kind of digital account book that renders transaction records transparent, some Bitcoin buyers and sellers have managed to stay anonymous.2,3

If speculators stopped believing bitcoin was valuable, then how valuable would it be? Nearly worthless, in the eyes of some observers. As NerdWallet investment writer Andrea Coombes recently remarked, “The value is in the demand itself.”4

In fact, Goldman Sachs analysts wonder if bitcoin will be valueless five or ten years from now. In a February note to investors, Goldman warned that bitcoin could very well be replaced by something else as cybercurrency evolves.5

In the financial markets, higher prices are not always succeeded by higher prices. This is essentially the belief holding up bitcoin. Its biggest fans believe its direction will be up and up, with occasional storms of volatility. This is called irrational exuberance, and it has harmed many investors through the years.

Whether you think bitcoin is the “new gold” or amounts to a bubble ready to burst, its extreme, dangerous volatility means one thing – if you do choose to invest in it, you would be wise to only invest money that you can afford to lose.

This material was prepared by MarketingPro, Inc., and does not necessarily represent the views of the presenting party, nor their affiliates. This information has been derived from sources believed to be accurate. Please note - investing involves risk, and past performance is no guarantee of future results. The publisher is not engaged in rendering legal, accounting or other professional services. If assistance is needed, the reader is advised to engage the services of a competent professional. This information should not be construed as investment, tax or legal advice and may not be relied on for the purpose of avoiding any Federal tax penalty. This is neither a solicitation nor recommendation to purchase or sell any investment or insurance product or service, and should not be relied upon as such. All indices are unmanaged and are not illustrative of any particular investment.